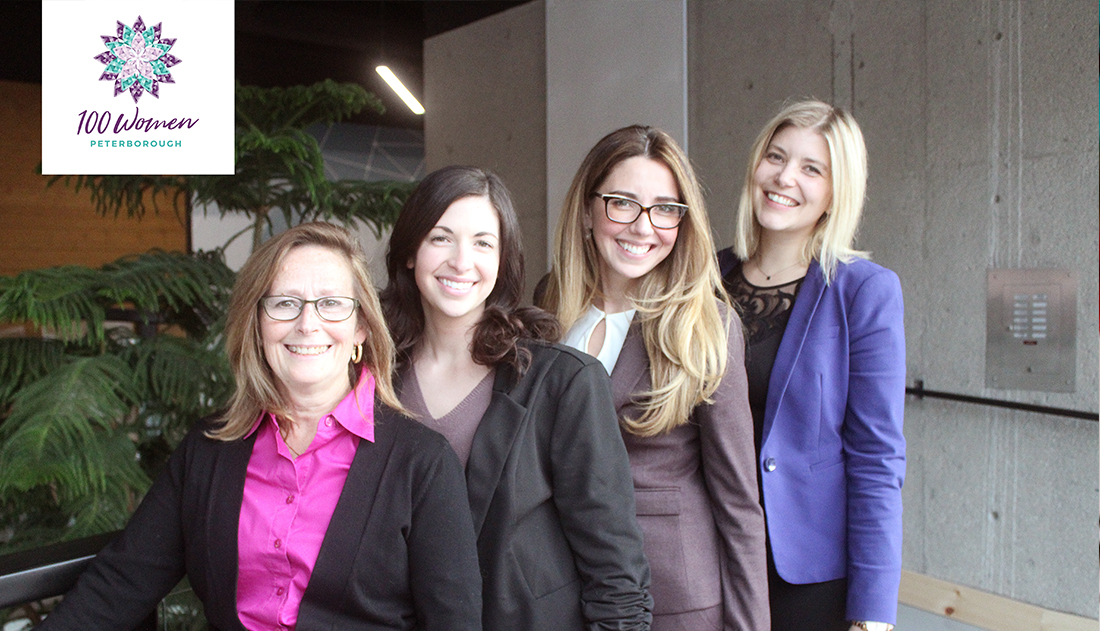 February 8, 2018 – Peterborough, Ontario – Four local women have come together to launch 100 Women Peterborough – a group to encourage women’s involvement in philanthropic endeavors in the Peterborough community.

100 Women Peterborough, founded by Wendy Hill, Catia Skinner, Alyssa Stewart and Rosalea Terry, aims to bring 100 women together to make a collective impact. The idea was inspired by other groups in similar communities and the men’s group in Peterborough which launched in 2017. The four women came together to let others know that they can make a difference.

“It is often difficult to know if a smaller, individual donation can make a difference,” says Catia Skinner. “However, when multiple people donate at the same time it can impact an organization significantly.”

The concept of 100 Women Peterborough is simple: four times a year, one hundred Peterborough women will gather to hear presentations from three selected, predetermined non-profits/charities in the region about projects for which they are seeking funds. After listening to the organizations, the women will place their blank $100 cheque into the organization’s box to vote. The organization that receives the most votes will receive the total amount of $10,000.

The first 100 Women Who Care group was formed in November 2006 by Karen Dunigan in the USA as a simple way to raise money efficiently and quickly for local charities. At their first one hour meeting, the group of over 100 women raise over $10,000 which went toward the purchase of 300 new baby cribs for a local Family Health Centre in their city.

Today, there are over 83 chapters in North America including a dozen or so in Canada.

The Peterborough event will take place once a quarter and host a total of twelve organizations to vie for the women’s votes throughout the year. The first event is set to take place early this year.

Members commit to donate one hundred dollars at each of the four events hosted throughout the year. The aim is to help women learn about the multitude of different causes in the community, help people in need and join other like-minded women to empower and multiply the impact of their contributions.

“Many people hope to make large-scale donations to individual causes, however sometimes that can be beyond an individual’s means,” says Catia Skinner. “This organized group means that individuals can come together to create a larger impact.”

Women that are interested in joining the group are encouraged to reach out via the website: www.100womenptbo.ca